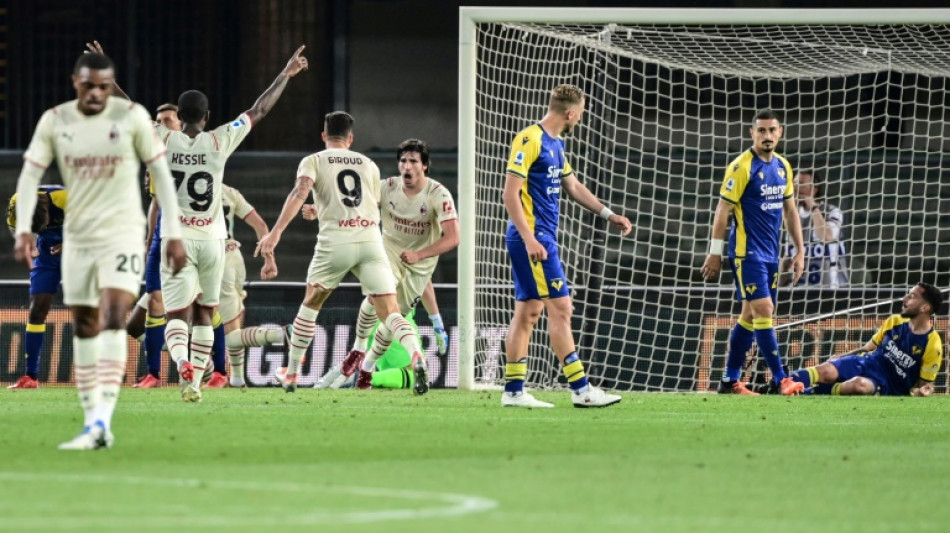 Sandro Tonali fired AC Milan closer to the Serie A title with a brace in Sunday's 3-1 win at Verona which maintained their two-point lead at the top of the league.

Italy midfielder Tonali struck with almost identical goals created by Rafael Leao either side of half-time to ensure they stay ahead of local rivals Inter Milan in a Scudetto race which looks to be heading to the wire.

The 22-year-old's double was the second time in three matches he has been crucial to Milan's title charge after also netting a last-minute winner at Lazio a fortnight ago.

Tonali thought he had opened the scoring in the 15th minute when he raced onto a long ball from goalkeeper Mike Maignan and slotted past Lorenzo Montipo, only for the wild celebrations among the away fans to be cut short by a tight offside ruling via VAR.

However Tonali had a deserved goal deep into first-half stoppage time when after Leao burst into the box he met the Portugal attacker's pass and pushed in the equaliser.

It galvanised Milan who were in front shortly after the restart thanks to a carbon copy effort, the only real difference being that Leao's low pass for Tonali's second was with his left foot.

From then on Milan were in almost complete control and Alessandro Florenzi made sure Milan continued their charge for a first league crown since 2011 when he exchanged passes with Junior Messias before rifling home his second Serie A goal of the season.

Giorgio Altare's thumping header in the ninth minute of stoppage handed Cagliari a dramatic 1-1 draw at Salernitana which kept their survival hopes alive.

The 23-year-old's last-gasp effort, which came just moments after they had a penalty revoked following a long VAR check, ensured that Cagliari stay a single point behind 17th-placed Salernitana.

"I'm really pleased with what the boys did out there on the pitch," said Alessandro Agostino, in charge of Cagliari for the first time following Monday's sacking of Walter Mazzarri.

"That denied penalty would have killed off most people but they had the heart to get back up and keep everything alive."

The chants rattling around the Stadio Arechi in Salerno after Simone Verdi's 68th-minute spot-kick vanished once Altare levelled to stop the hosts from moving four points clear of the bottom three with two matches remaining.

Davide Nicola's side, who are attempting a miracle escape act after being bottom of the division for most of the season, still face a fight in what will be an enthralling run-in with the bottom six teams still not safe.

Among them are current bottom side Venezia, whose top flight status is secure for at least another week after Altare's header and a 4-3 home win over Bologna which came thanks to another superb stoppage time finish from Dennis Johnsen.

Norway's Johnsen won a thrilling encounter in Venice as the home team came back from 3-2 down in the final minutes after throwing away an early two-goal lead of their own.

"I think that as long as there's a theoretical chance that we can do it we just have to fight," said Johnsen, whose team trail Salernitana by five points and face Cagliari on the final day of the season.

Earlier Atalanta kept up their bid for European football next season with a 3-1 win at Spezia which put them level on points with Roma, who sit sixth and in the second Europa League berth ahead of their match at eighth-placed Fiorentina on Monday.