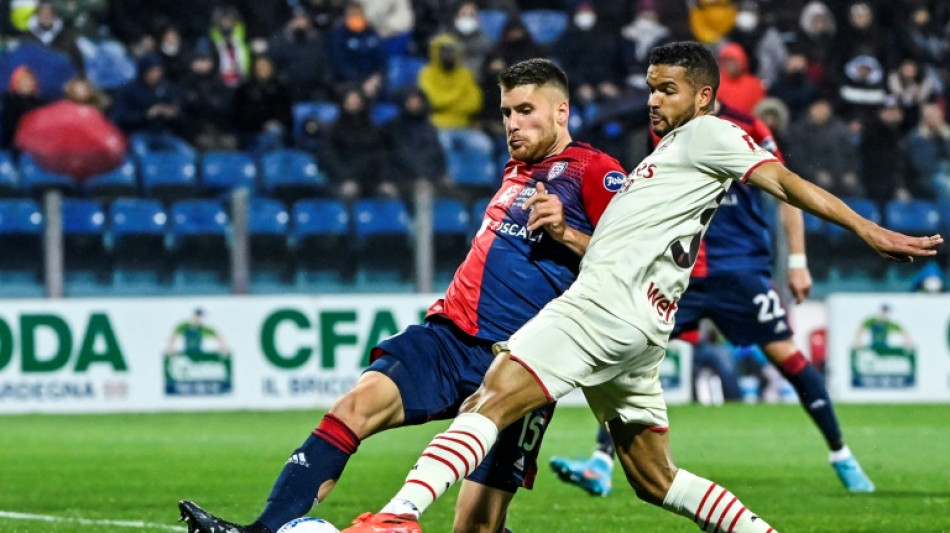 Giorgio Altare struck at the death to earn Cagliari a heart-stopping 1-1 draw at Salernitana on Sunday which kept his team in the fight for Serie A survival.

With the match in the ninth minute of stoppage time and Salernitana leading thanks to Simone Verdi's 68th-minute penalty, Altare smashed home an unstoppable header to snatch a point just moments after the Sardinians had a spot-kick revoked following a long VAR check.

The 23-year-old ensured that Cagliari, who sit just inside the relegation zone, stay a single point behind 17th-placed Salernitana.

"I'm really pleased with what the boys did out there on the pitch," said Alessandro Agostino, in charge of Cagliari for the first time following Monday's sacking of Walter Mazzarri.

"That denied penalty would have killed off most people but they had the heart to get back up and keep everything alive."

The chants rattling around the Stadio Arechi in Salerno vanished once Altare levelled the scores to stop the hosts from moving four points clear of the bottom three with two matches remaining.

Instead Davide Nicola's side, who are attempting a miracle escape act after being bottom of the division for most of the season, still face a fight in what will be a dramatic run-in with the bottom six teams still not safe.

Among them are current bottom side Venezia, whose top flight status is secure for at least another week after Altare's header and a 4-3 home win over Bologna which came thanks to another superb stoppage time finish from Dennis Johnsen.

Norway's Johnsen won a thrilling encounter in Venice as the home team came back from 3-2 down in the final minutes after throwing away an early two-goal lead of their own.

"I think that as long as there's a theoretical chance that we can do it we just have to fight," said Johnsen, whose team trail Salernitana by five points and face Cagliari on the final day of the season.

Bologna, who welcomed back coach Sinisa Mihajlovic after the Serb was discharged from hospital in the week following lukemia treatment, stay 13th.

The away side were livid at the decision to award the soft penalty which Mattia Aramu slotted home to level the scores at 3-3 12 minutes from the end.

Aramu fell to the ground after the faintest of touches from Gary Medel and VAR confirmed a penalty decision which left Mihajlovic baffled.

"The referee practically ran off the field at the final whistle, like he was trying to get away or had a dirty conscience."

Earlier Atalanta kept up their bid for European football next season with a 3-1 win at Spezia.

Goals from Luis Muriel, Berat Djimsiti and Mario Pasalic took the three points for Atalanta on the Italian Riviera, moving Gian Piero Gasperini's side up to seventh and in with a shout of Europa League football.

After three straight seasons of Champions League action the best Atalanta can hope for is Europe's second-tier competition as they sit 10 points behind fourth-placed Juventus.

With Juve and league leaders Inter Milan contesting the Italian Cup final on Wednesday, the two Europa League spots can be earned through league placings.

Atalanta are level on points with Roma, who sit sixth and in the second Europa League berth ahead of their match at eighth-placed Fiorentina on Monday.