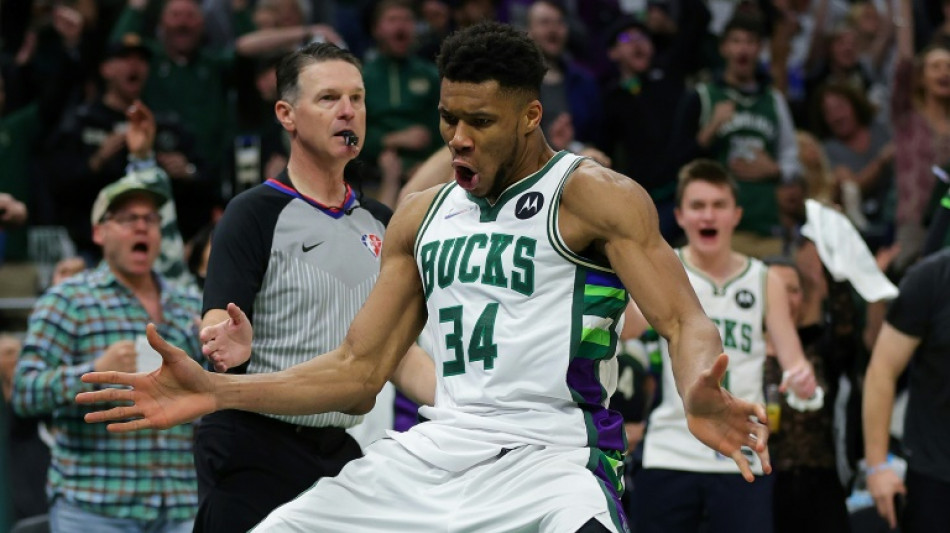 The Greek superstar center also had two blocked shots and two steals for the Bucks, who seized a 2-1 lead in the best-of-seven Eastern Conference second round series, which continues at Milwaukee on Monday.

In Western Conference action, the Golden State Warriors went up 2-1 on the Memphis Grizzlies with a 142-112 blowout in San Francisco.

The defeat was even more painful for the Grizzlies as they saw star Ja Morant limp out with an apparent knee injury late in the fourth quarter.

Morant had been sensational in defeat, scoring 34 points with three rebounds and seven assists. He appeared to hurt his knee in a tussle for a loose ball in the final period.

But the Grizzlies couldn't slow a Warriors team that connected on 63.1% of their shots, with Stephen Curry leading the way with 30 points and Jordan Poole adding 27 off the bench.

Klay Thompson scored 21 for the Warriors, who had six players score in double figures in a comprehensive victory.

But the Warriors responded and pulled ahead in the second quarter, building a 64-57 halftime lead that would have been bigger but for Morant's buzzer-beating three-pointer from halfcourt.

The Warriors took a 21-point lead into the final quarter and were never threatened.

"We were a little bit more composed," Curry said. "They got off to a hot start, like six threes in the first quarter. We had to settle in. We still had too many turnovers.

"But our shot selection, moving the ball, let us settle in the game a little bit, helped our defense, helped us run away with the game."

In Milwaukee, the Celtics rallied from 14 points down to pull within 103-100 with 4.6 seconds remaining, and Boston's Marcus Smart sank the first of two free throws to lift the visitors within the final margin.

Smart missed the second free throw with hopes of grabbing a rebound and making a tying inside shot, but Robert Williams missed a tip-in try and Al Horford's tip-in was ruled to have come after the final buzzer, giving Milwaukee the victory.

"It was very close," Bucks center Brook Lopez acknowledged of the Horford tip-in.

Celtics coach Ime Udoka said the foul by Jrue Holiday on Smart, ruled before a shot attempt, should have been seen as coming in the act of shooting and brought three free throws, which would have given Smart a chance to tie the game at the line.

"He was going into the shot," Udoka said. "Poor no-call. It's a shot. He's curling into a shot. Bad missed call."

Bucks coach Mike Budenholzer said the Bucks were "fortunate it was two free throws but we were not trying to foul him.

Udoka also said it should not have come down to that.

"We were sloppy in the third execution-wise and allowed them to get that lead, then battled back in the fourth," he said. "But we can play a lot better."

Holiday had 25 points for the Bucks, while Lopez added 13 points and 10 rebounds.

Antetokounmpo, meanwhile, bounced back from a poor shooting night in game two, connecting on 16 of 30 shots.

"I know what my strengths are," Antetokounmpo said. "Just try to read what's in front of me and just play with my instincts."

Jaylen Brown led Boston with 27 points and had 12 rebounds, while Horford had 22 points and 16 rebounds for the Celtics, but Jayson Tatum went 4-of-19 from the floor and scored only 10 points.