Germany's new-look attack a work in progress after Japan shock 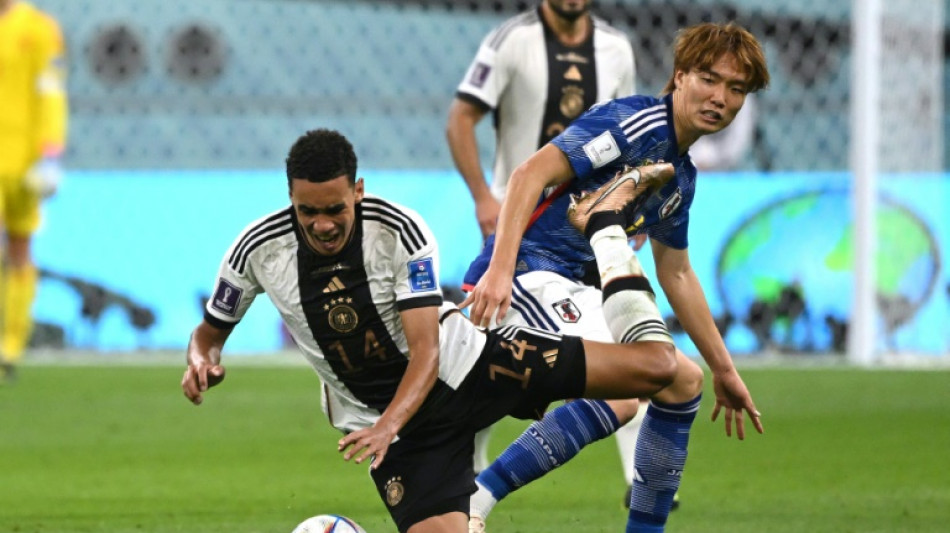 Germany have work to do to get their new-look World Cup attack to click after Kai Havertz and teenager Jamal Musiala spurned chances, allowing Japan to pull off a stunning 2-1 win on Wednesday.

The Germans led for much of the match thanks to a first half-penalty from Manchester City midfielder Ilkay Gundogan, but when they needed Chelsea forward Havertz and strike partner Musiala to put the game to bed, they were left wanting.

That allowed Japan to hit back with two late goals through Ritsu Doan and Takuma Asano -- both of whom ply their trade in the German Bundesliga -- to secure a famous victory over the four-time World Cup winners.

"It's desperately disappointing. We had a lot of possession and we deservedly took the lead," said Germany coach Hansi Flick.

"After that we had a lot of chances which we didn't make the most of... we can't have these sorts of individual errors."

In the early stages, he resembled something he has not so far in his short career -- a teenager playing with men.

After just four minutes in the Khalifa International Stadium, Musiala failed to control a pass in his own half, losing possession which led to a rapid Japan counter-attack and an eventual corner.

Another German attack fizzled out just eight minutes later when Musiala, in his familiar position hovering around the edge of the box, tried one dribble too many and again lost the ball.

Musiala's stuttering start dented the teenager's confidence as he opted to pass in dangerous situations on several occasions.

It was not until the second half when the teenager was able to overcome the nerves and recapture his form for Bayern, dribbling past four Japanese players in the 50th minute before blasting a shot over the bar.

Havertz, who had a goal ruled out for offside late in the second half, was increasingly anonymous as the game wore on, with Flick bringing on debutants Niclas Fuellkrug and Youssoufa Moukoko in the dying stages in an attempt to save the match.

Germany next face 2010 champions Spain -- who demolished Costa Rica 7-0 later on Wednesday -- and will need to find their form in front of goal if they are to avoid a second straight group stage exit at the World Cup.