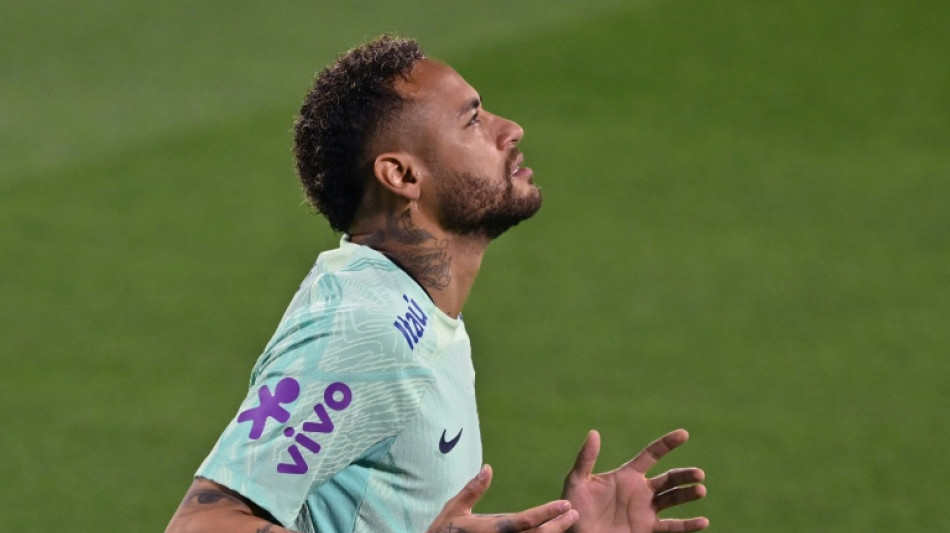 Brazil are hoping a fully fit and firing Neymar, and a well-balanced squad around him, will allow the five-time winners to live up to their status as World Cup favourites in Qatar.

They begin their bid to win a record-extending sixth title on Thursday when they play a dangerous Serbia side -- and the world's most expensive player is coming into the tournament in ominous form.

In 2014, Neymar's World Cup ended in agony as he suffered a fractured bone in his back in the quarter-final win over Colombia before the hosts were humiliated by Germany in the semi-finals, losing 7-1.

Four years later Neymar raced to recover from injury in time for the tournament in Russia, but Brazil never hit the expected heights before losing to Belgium in the last eight.

This time around, a 30-year-old Neymar arrives fresh from a fantastic start to the season with Paris Saint-Germain in which he has scored 15 goals in 20 games.

"I think Neymar is coming into this competition in great form," veteran Brazil captain Thiago Silva, now with Chelsea but a former teammate of Neymar's in Paris, told reporters on Wednesday.

"His preparation this time has been different. In 2014 he got injured just as he was playing so well, and in 2018 he came into the tournament in a different way because he had a serious injury so hadn't played much.

"This time is different and he has not been injured. Neymar is a lot better prepared."

With Brazil also facing Switzerland and Cameroon in Group G, Neymar will be hoping to get the two goals he needs to equal Pele's all-time record tally of 77 goals for the Selecao.

But the responsibility in attack is not all his -- coach Tite can also call on a raft of other exciting attackers, including Real Madrid pair Vinicius Junior and Rodrygo.

"In my opinion these players will help Neymar because they can divide up the responsibility and create space for him," added Silva, who was the captain in 2014 and is still going strong aged 38.

This tournament has already seen a heavily fancied Argentina lose in their opening match while Germany have been beaten too.

But Brazil are hoping for a strong start and a repeat of what happened in the only other World Cup to be held in Asia, when they won their last title in Japan two decades ago.

"The atmosphere in the squad is super healthy. The mixture of young players and more experienced ones creates a great connection," said Silva.

"We have players who are accustomed to the pressure, who are used to the pressure of big games in the Champions League like Vini and Rodrygo, who are among the youngest players in the squad but have already shown they can be decisive."

Silva is one of the few survivors of the 2014 team that was overwhelmed by the pressure of trying to win the World Cup on home soil.

This time he is hoping to be a calming influence on the rest of the squad.

"Some things change over time. I am now much better prepared for this moment, I am super calm and super determined," he said.

"I am enjoying myself at the moment and I am eager to show the best version of Thiago Silva. At the age of 38 I am enjoying one of the best spells in my career."

Coach Tite, 61, will step down at the end of the World Cup, whatever happens in Qatar.

He survived in the job after the quarter-final exit in Russia in 2018 and this time he is hoping to depart Doha as a world champion.

"As Tostao said, it's good to dream, so we are dreaming of having a good World Cup and winning it," he said, citing one of the greats of Brazil's 1970 World Cup-winning side.

"Only one team can be the champions. Other teams want to be too. Pressure is inevitable."