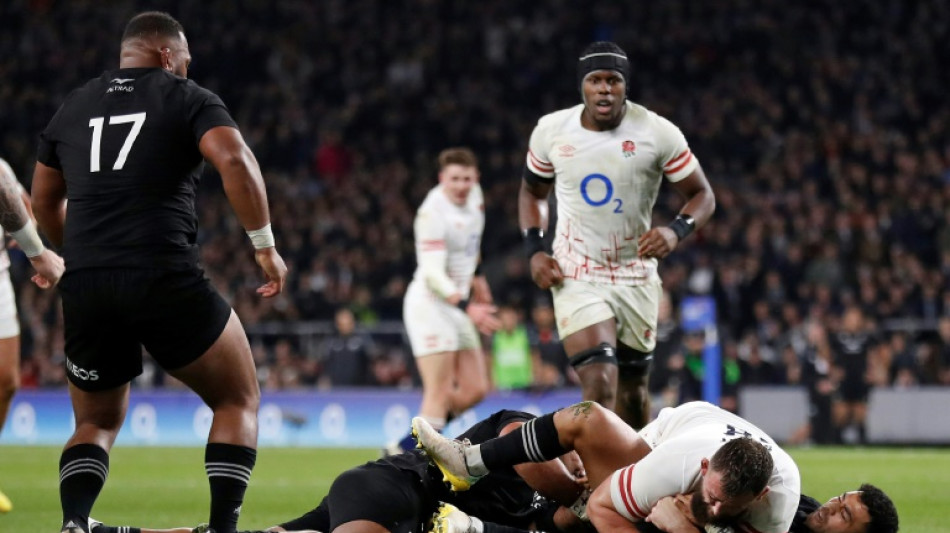 Two-try hero Will Stuart said he still had work to do on his scoring technique after almost failing to touch down properly in England's remarkable 25-25 draw with New Zealand.

England seemed destined for a decisive defeat when the All Blacks led 25-6 with nine minutes left at Twickenham on Saturday.

But replacement prop Stuart twice forced his way over either side of a try by full-back Freddie Steward as England crossed the All Blacks line three times in a frantic finale to secure just the second draw in 43 meetings between the teams.

The 26-year-old tighthead's double saw him become the first England prop to score two tries in a Test.

He was, however, twice held-up over the goal-line and both his scores were only confirmed after lengthy reviews by the television match official.

"Will's got a special session on Monday -- how to score a try," said England head coach Eddie Jones.

"I've never seen a player try to put the ball between his legs and score a try! It's the most unusual technique!", the veteran Australian boss told reporters.

Bath giant Stuart admitted: "I nearly botched that first try completely and Eddie said I need to sort out my finishing drills so I might be doing some of that with the wingers next week.

"I think it was PTSD (post-traumatic stress disorder) from Cockers (England forwards coach Richard Cockerill), because we’re used to presenting the ball as quickly as possible rather than score the try so I think I just went, 'I'll just snap the ball back as quickly as possible'. Thankfully it did touch down at some point."

But while encouraged by the way England fought back from 14-0 down against New Zealand after conceding two tries in the opening eight minutes, Stuart knows they cannot afford another sluggish start against South Africa, with the world champions their final Autumn Nations Series opponents at Twickenham next Saturday (November 26).

"It was my first time playing them (New Zealand) and that was the whole chat during the week -- they're not the same team as the All Blacks of 10 years ago," said Stuart.

"There's an opportunity to start imposing ourselves on them which we didn't do in the first half but as the game started going on, we could get a bit of momentum.

"We bumped up the physicality way more in the forwards. Momentum in games is a weird thing because it's so infectious."

He added: "When you're on the receiving end of it, it feels like everything is going wrong and then when you start getting phases together and applying them, there's no better feeling. Especially as a forward getting around the corner, making carries, it's pretty infectious and is a good feeling.

"We saw what we can do when we start going at teams. That first half will be a big focus point."