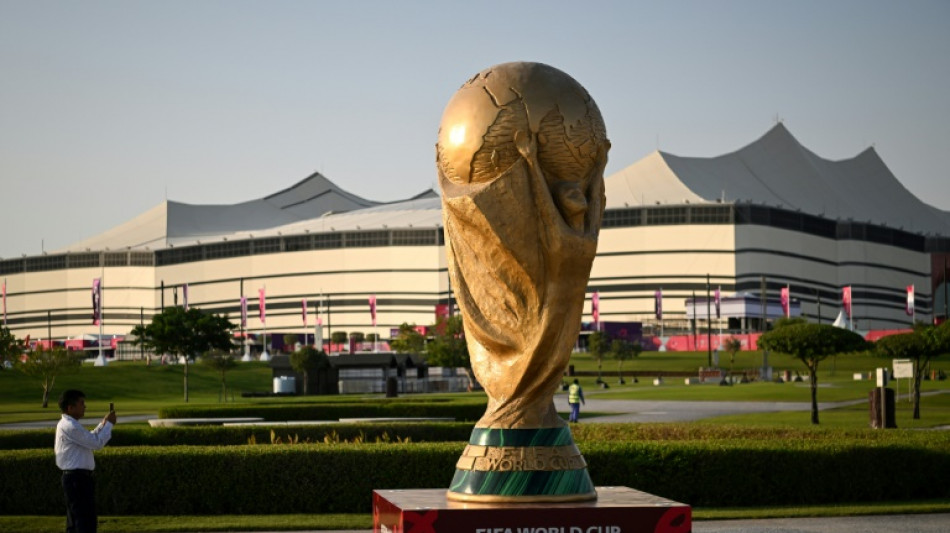 The week-long countdown to the World Cup in Qatar began on Monday as the world's leading footballers focused their attention on one of the most controversial tournaments in history.

After a last weekend of action, domestic leagues paused for six weeks to allow the tournament to take place, but preparation time is short for the teams.

The first World Cup to be held in the Arab world will kick off on Sunday when the host nation face Ecuador.

Holding football's showpiece event in a desert state has necessitated an unprecedented reorganisation of the international football calendar, shifting the World Cup from its normal slot in the northern hemisphere summer to avoid the Gulf's scorching heat.

Mbappe, who will spearhead France's defence of their title in Qatar, signed off in style by scoring PSG's opening goal.

Teams must submit their final squad lists on Monday.

Iran named Sardar Azmoun, their star player who has expressed support for the demonstrations in his homeland, in their final 25-man squad.

Azmoun, who plays for German club Bayer Leverkusen, has posted several social media messages of support for the protests that were sparked by the death of 22-year-old Mahsa Amini. Hundreds have died in the unrest.

Sunday's kickoff marks the culmination of Qatar's extraordinary campaign to first win the vote to land the tournament and then embark on a spending spree of tens of billions of dollars to build stadiums and infrastructure.

FIFA's pleas to "focus on the football" have struggled to be heard as the countdown to kick-off has only increased scrutiny of the Gulf state's treatment of migrant workers, women and the LGBTQ community.

Labourers from South Asia have been at the centre of an often acrimonious dispute over deaths, injuries and their working conditions since Qatar was awarded the World Cup in 2010.

Amnesty International on Friday made an urgent plea for FIFA president Gianni Infantino to commit to a compensation package for the workers who built the tournament's gleaming stadiums.

Qatar has angrily rebuffed most of the attacks and local media have blasted the "arrogance" of some Western countries.

Sophia Stone, a Briton who lives in Doha, said the negative press was unfair.

"I wouldn't listen to everything you hear on the news," she told AFP. "If you really want to have an opinion about it then come to Qatar and see for yourself. From what I am reading, it isn't like that at all. It is very open-minded and welcoming."

The country of barely three million people, one of the world's biggest producers of natural gas, has spent lavishly.

New stadiums cost more than $6.5 billion and a driverless metro system with a price tag of $36 billion serves five of the eight venues.

Some estimates put total infrastructure spending over the past decade at $200 billion.

Organisers have predicted more than one million fans will travel to Qatar and they have responded to concerns about a lack of accommodation by using three cruise ships as floating hotels. They are fully booked for the first two weeks of the tournament.

Organisers say that 2.9 million of the 3.1 million tickets have been sold and fans have been waiting outside the FIFA ticketing centre hoping scarce tickets become available for top games.

Qatar announced its first arrests of World Cup ticket touts on Monday, with three foreign men detained outside official ticketing centres in Doha. No details were given of their nationality.

In Europe, unease at a country with virtually no tradition of football hosting the tournament is keenly felt.

Germany's 2014 World Cup-winning captain Philipp Lahm said on Sunday that Qatar should never have been allowed to host the World Cup because of rights abuses.

"Awarding the World Cup to Qatar was a mistake," Lahm wrote in a column for Die Zeit newspaper. "It doesn't belong there."