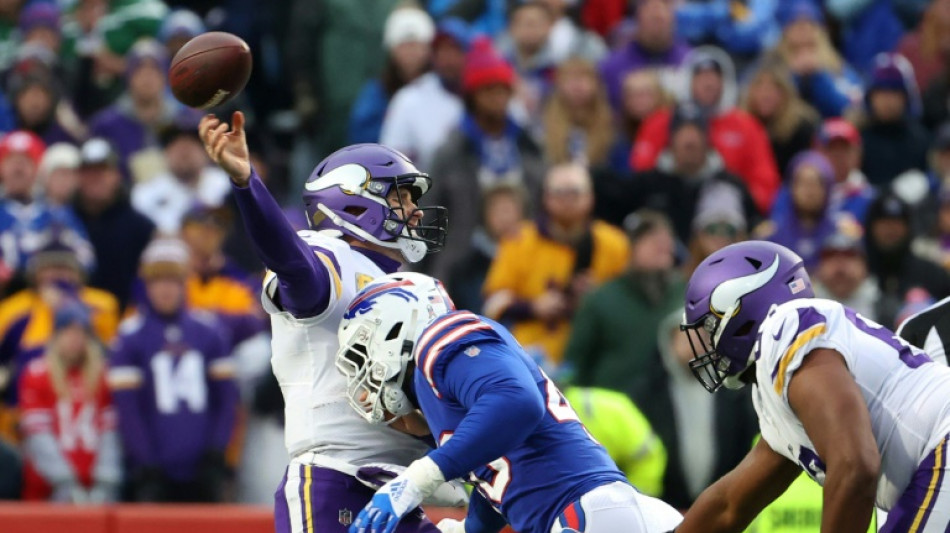 The Minnesota Vikings defeated the Buffalo Bills 33-30 in an epic overtime clash on Sunday between two of the hottest teams in the NFL.

After a game that featured several dizzying swings of direction in an extraordinary end to the fourth quarter, the Vikings had to settle for a field goal to open overtime.

But Bills quarterback Josh Allen then threw an interception to hand the game to the visitors, who moved to 8-1 with a statement victory.

The result saw the Bills fall to 6-3 and lose top spot in the AFC East to the Miami Dolphins (7-3) who beat the Cleveland Browns 39-17.

The Vikings have made a habit of comeback wins this season and they were inches away from doing so in the fourth quarter.

Minnesota had trailed 27-10 in the third but rallied thanks to an 81 yard touchdown run from Dalvin Cook.

C.J. Ham's three yard rush at the start of the fourth shifted the momentum further to the Vikings but Greg Joseph's point after kick struck the post leaving the Vikings needing a touchdown to win.

Cousins then led Minnesota down the field, helped by two superb catches from receiver Justin Jefferson, including a remarkable leap for a 32 yard catch to keep the drive alive on fourth down.

The Vikings thought they had the touchdown when Cousins again found Jefferson but the officials reversed their decision after a review ruling the receiver had not broken the plane of the goal line.

On fourth and goal, Cousins then looked to Cook who dropped the pass but a flag on the play allowed the Vikings quarterback a second chance.

This time Cousins went for a quarterback sneak but fell just short and it seemed that somehow the Bills had survived.

But there was another twist in the tale as Allen fumbled a poor snap and Eric Kendricks recovered the ball for a touchdown that put the Vikings three up with 41 seconds left on the clock.

Allen led a five play, 69 yard drive that ended with a Tyler Bass field goal that forced the game into overtime.

Joseph's overtime field goal left the Bills with the chance to win the game with a touchdown, but on second and 10 at the Minnesota 20 yard line, Allen forced a pass towards Gabe Davis and Patrick Peterson grabbed the game winning interception.

"It was a pretty unbelievable football game to be a part of," said Vikings head coach Kevin O'Connell.

"It was a big day for us, kind of confirming who we think we are as a football team," he added.

Quarterback Tua Tagovailoa again impressed for Miami, throwing for 285 yards and three touchdowns as the Dolphins took full advantage of the Bills' loss.

Dolphins running back Jeff Wilson Jr, who Miami traded a fifth round pick for to bring from the San Francisco 49ers, rushed for 119 yards on 17 carries, including a 20 yard touchdown run to complete the win.

Overtime was also needed in Green Bay where the Packers ended a five match losing streak, coming back from 14 points down for a 31-28 victory.

Cowboys heads coach Mike McCarthy returned to Green Bay for the first time, after 12 years as coach of the Packers which included a Super Bowl win.

McCarthy's current side were 28-14 up early in the fourth before Aaron Rodgers twice found rookie receiver Christian Watson to force the game into overtime.

The Cowboys had the first possession and McCarthy opted to go for it on fourth and three but Dak Prescott's pass was incomplete leaving the Packers needing just a field goal.

That came at the end of a 55 yard, six play drive when Mason Crosby converted from 28 yards to claim a much-needed win for the Packers who improved to 4-6 to keep their season alive.

The day opened with Tom Brady and the Tampa Bay Buccaneers tasting victory in Munich as the first regular season game in Germany ended with their 21-16 win over the Seattle Seahawks.

The New York Giants improved to 7-2 with a 24-16 win over the Houston Texans while the Kansas City Chiefs beat the Jacksonville Jaguars 27-17 with quarterback Patrick Mahomes throwing for 331 yards and four touchdowns.

The Detroit Lions rallied for a second straight win, after losing five in a row, as they scored three touchdowns in the fourth quarter to beat the Chicago Bears 31-20 at Soldier Field.