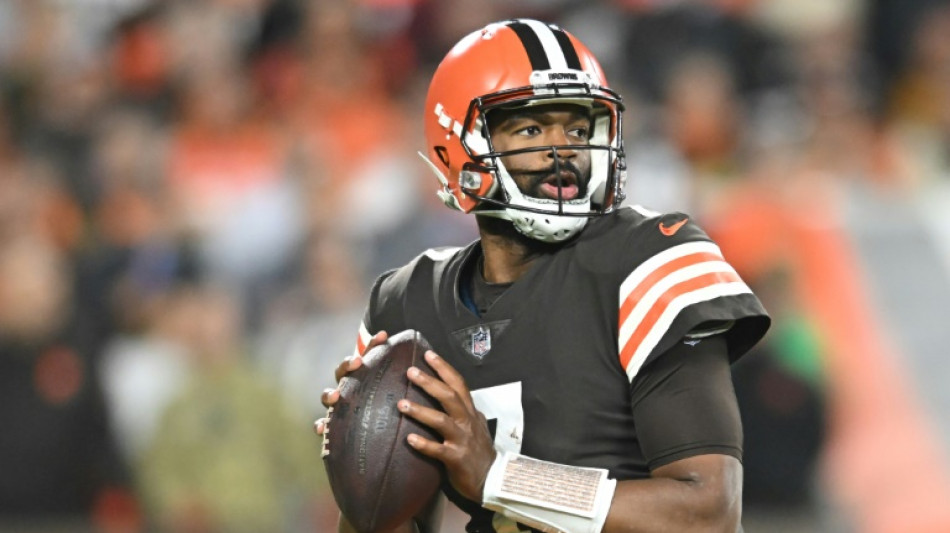 Quarterback Jacoby Brissett led Cleveland to a 29-17 NFL victory over the Pittsburgh Steelers on Thursday, the Browns rebounding on short rest from a devastating loss to the New York Jets.

Brissett, starting under center while Browns quarterback Deshaun Watson serves his 11-game suspension, connected on 21 of 31 passes for 220 yards and two touchdowns.

The Browns led 16-14 going into the fourth quarter in Cleveland, hardly cause for confidence less than a week removed from their late collapse in a 31-30 loss to the Jets.

However, Brissett launched the fourth quarter with a long touchdown drive, capped by Chubb's one-yard touchdown plunge to make it 23-14.

"We came off a really tough one last week," Brissett said. "We understood how short a week we had, I think the guys in that room answered the call."

The Steelers trimmed the deficit on a 34-yard field goal by Chris Boswell with 1:48 remaining and the Browns ate up the clock on their next possession before they were forced to punt.

The Steelers' last-gasp effort failed as Cleveland's Denzel Ward recovered a fumble in the end zone for a last-second touchdown that accounted for the final margin.

Brissett was sharp in the first half, finding Amari Cooper for an 11-yard touchdown and hitting David Njoku with a seven-yard TD pass that made it 13-7 for the Browns, who saw one extra point attempt failing.

Steelers quarterback Mitch Trubisky connected on 20 of 32 passes for 207 yards and Pittsburgh receiver George Pickens had the play of the first half with a one-handed catch that set up the first touchdown of the night -- Najee Harris's five-yard run.

Trubisky ran for another score to put the Steelers up by one at the break.

But Pittsburgh struggled offensively in the second half, and the Browns held on to ease the sting of blowing a 13-point lead in the last two minutes on Sunday.

The victory came at a cost, however, as Browns linebacker Anthony Walker was carted off the field in the third quarter with what the team later said was a sprained knee.

Walker had a team-high six tackles when he was hurt.