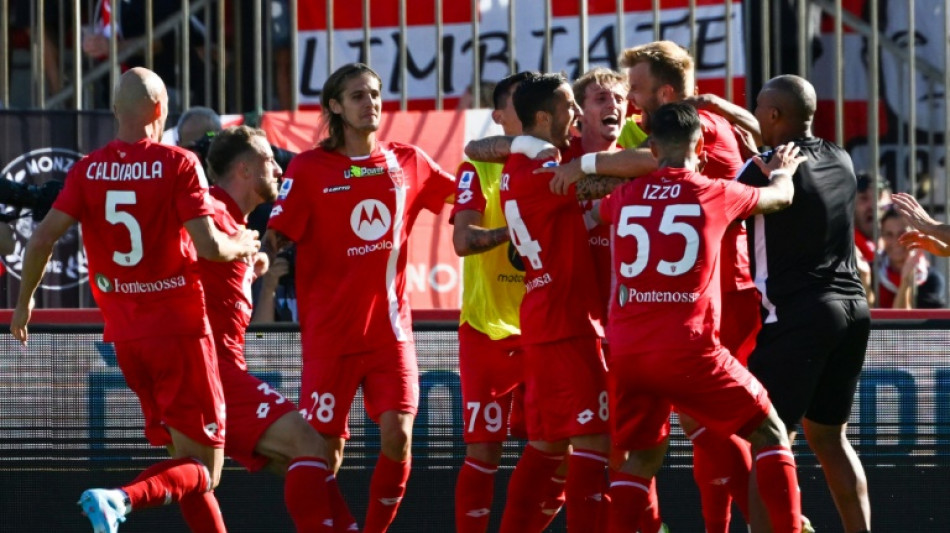 Monza won their first ever match in Serie A on Sunday, stunning 10-man Juventus 1-0 to pile more pressure on under-fire Massimiliano Allegri.

Christian Gytkjaer netted a historic goal 15 minutes from the end at the U-Power Stadium to move the club owned by Silvio Berlusconi off the bottom of the table and end Juve's unbeaten start to the season.

Monza took their first three points of the campaign in their first match under Raffaele Palladino, who replaced sacked Giovanni Stroppa on Tuesday.

They are still in the relegation zone but a single point behind 17th-placed Verona, who lost 2-0 at Fiorentina.

"They showed themselves to be real men... they gave everything, I shouldn't get any of the credit because it was all down to them."

They are six points behind provisional league leaders Udinese following their 3-1 win over Inter Milan earlier on Sunday.

Before the match Juve CEO said it would be "crazy" to sack Allegri, under contract until 2025 on a reported salary of eight million euros a year.

But a poor start in Italy and two defeats in their opening two Champions League matches have put Allegri in the firing line for supporters, criticised not only for bad results but also for the uninspiring football his team is playing.

Allegri has not been helped by an injury crisis which on Sunday denied him five potential starters. Juve's chances on Sunday were hit further when Di Maria was sent off for elbowing Armando Izzo.

Juve had created little before the Argentina winger's dismissal.

Monza who went closest to opening the scoring after the break, first Dany Mota and then Gytkjaer fluffing good chances from close range.

Patrick Ciurria had given Mota his chance and the Italian clipped a pass for Gytkjaer who swept the ball home to score his first goal in the Italian top flight, send the home fans wild and leave Juve wondering where to turn next.

Surprising Udinese won their fifth straight match thanks to Milan Skriniar's 22nd-minute own goal and late headers from Jaka Bijol and Tolgay Arslan.

Andrea Sottil's side are two points ahead of Napoli, Atalanta, AC Milan and Lazio -- 4-0 winners at Cremonese -- after bouncing back from Nicolo Barella's superb early free-kick opener for Inter.

"We always give 100 percent, we're a good group of players," said Arslan.

"Let's keep our heads though, we have a match at Verona in two weeks time and our minds need to be focussed on that, not anything else."

Three of chasing four play later on Sunday and have the chance to claim the summit.

Champions Milan host Napoli at the San Siro in the weekend's headline match, while Atalanta head to fifth-placed Roma hoping to maintain their unbeaten record.

Inter sit four points off the pace in seventh after their third league defeat of a difficult opening to the season.

"It's the third time that we've taken the lead and lost 3-1," said Inter coach Simone Inzaghi.

"We've conceded nine times in three away matches, when last year we conceded that many in the first half of the season."

They were deservedly beaten at the Dacia Arena in Udine, creating little and fortunate not to fall behind earlier as Gerard Deulofeu struck the post with 18 minutes remaining.