Berliner Tageszeitung - As teenagers make noise at the pool, veterans save energy

As teenagers make noise at the pool, veterans save energy 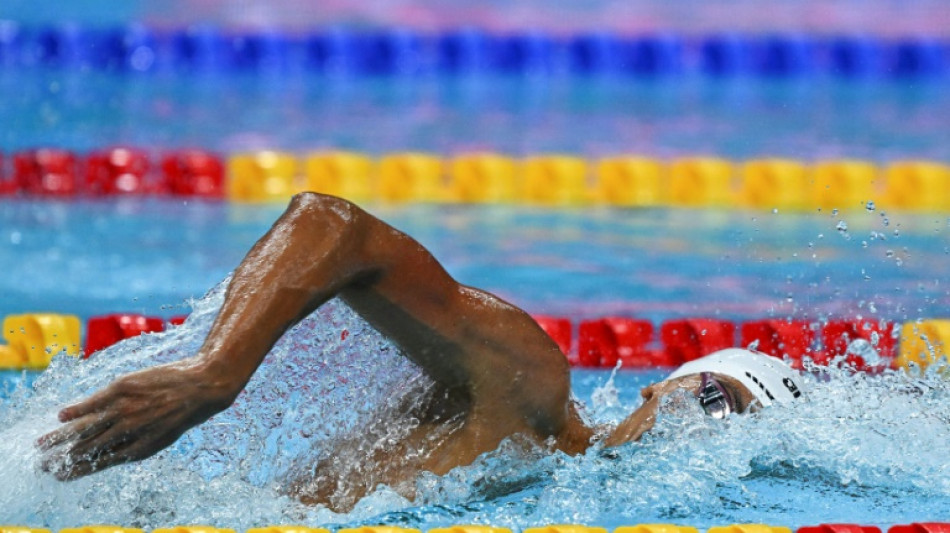 As teenagers make noise at the pool, veterans save energy / Foto: © AFP

While many old hands conserved energy on a relaxed Sunday morning of heats at the World Swimming Championships in Budapest, several teenagers were prepared to roil the waters.

One young swimmer in a hurry was Romanian 17-year-old David Popovici.

He attacked from the start of his 200m freestyle heat and finished easily fastest in qualifying in 1min 45.18sec.

South Korean Hwang Sunwoo who is 19, was 0.61sec behind, followed by Austrian Felix Auboeck, who was fourth in Saturday's 400m free final.

Briton Tom Dean, the Olympic champion, was next.

In contrast, Katie Ledecky was in energy-saving mode as she won her heat in the longest pool event, the 1500m, in 15min 47.02sec.

That was almost 27 seconds outside her world record, but more than nine seconds ahead of the next-best swimmer, Italian Simona Quadrella.

Ledecky, the world record holder and Olympic champion, had her run of three straight world titles broken when she was too ill to race the 1500 final in Gwangju three years ago after swimming fastest in qualifying.

Quadrella took advantage in South Korea to grab the gold.

Sunday morning opened with the heats of the women's 100m backstroke.

None of the 16 swimmers who advanced to the semis needed to match their best times over the last 12 months.

Two 17-year-olds, Claire Curzan, from the United States, and Wan Letian from China, were the next two quickest.

The backstroke semi-finals on Sunday evening and the medley final are just 30 minutes apart.

The competition was a little fiercer in the men's 100 backstroke prelims.

With Evgeny Rylov and Kliment Kolesnikov, the Russians who filled the top two steps of the Olympic podium last year banned, there are gaps to be filled and youngsters who want to fill them.

Hunter Armstrong, a 21-year-old American, held off Japanese veteran Ryosuke Irie in a battle that gave them the two fastest times.

Tang Qianting, an 18-year-old from China, set the pace in the women's 100m breaststroke prelims coming within 0.16sec of her career best.

The American, who is chasing a third straight world title, shelved her normal attacking style and was two-thirds of a second slower than Tang, but still fast enough to advance.

They include Dutchman Arno Kamminga trying to emerge from the absent Adam Peaty's shadow in 100m breaststroke and Nicholas Santos chasing gold at 42 in the 50m butterfly.

In an event where the atmosphere has yet to match the frenzy of the championships in Budapest in 2017, Hungarian veteran Katinka Hosszu could ignite the crowd as she chases an unlikely repeat of the 200m medley world title.