Mayer, Roach strike as West Indies close in on victory 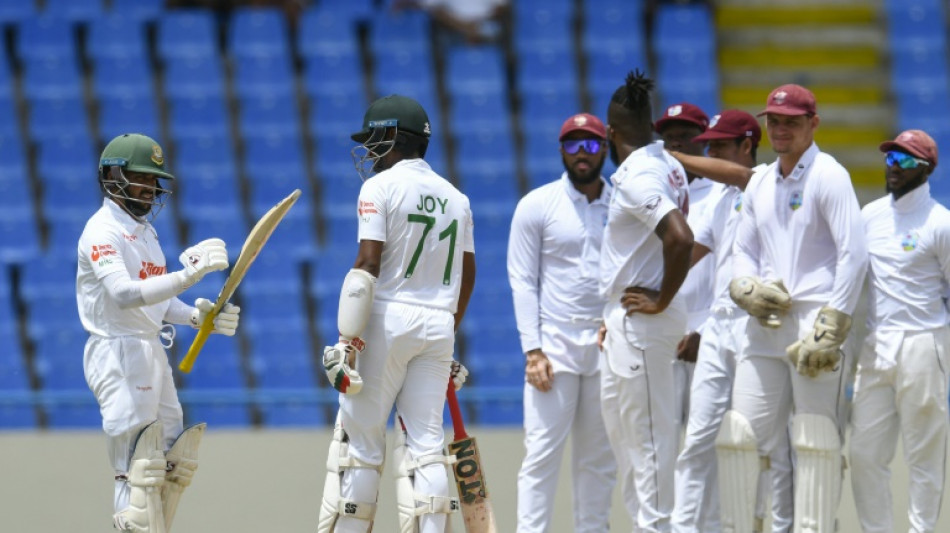 Kyle Mayers and Kemar Roach claimed two wickets each in the morning session as the West Indies closed in on an emphatic victory with Bangladesh limping to 115 for six in their second innings innings at lunch on the third day of the first Test on Saturday.

Bangladesh will resume in the afternoon session still needing another 47 runs to avoid an innings defeat.

They will hope captain Shakib Al Hasan will curb his often recklessly aggressive manner in partnership with wicketkeeper-batsman Nurul Hasan to bring some sort of respectability to what has been a generally ordinary effort by the tourists with the bat so far in this match.

Resuming this morning at 50 for two, there was a suggestion of resolve from the overnight pair of Mahmudul Hasan and Najmul Hossain.

But it was the introduction of Mayers which brought the breakthrough after half-an hour's play.

As evidence of the increasing regard and effectiveness of his medium-pace variations in swing and seam movement, he immediately induced an outside edge from Najmul's bat for John Campbell to take the catch at first slip.

He then added to former captain Mominul Haque's batting woes by trapping the diminutive left-hander leg-before with a full-length delivery.

With new batsman Liton Das appearing to be in the mood to offer more than a modicum of resistance, Hasan Joy continued to play with impressive discipline.

The 21-year-old resisted the temptation to launch into the expansive off-side shots which are impressive when they come off but carry the risk of fatal consequences.

However the discipline could not last with Roach returning for a second spell and continuing to serve up the tempting wide deliveries to the two right-handers.

Liton was the first to take the bait with Mayers snaring the chance comfortably at first slip before Hasan's more than three hours and 153 deliveries of discipline went out the window as he went after an even wider one for wicketkeeper Joshua da Silva to complete the catch.

His fighting innings of 42 was a good example from the young man for the rest of his team.

However, the early signs from Shakib, who missed with a wild heave to just the second delivery he faced, suggested it was a pattern the captain was not prepared to follow.