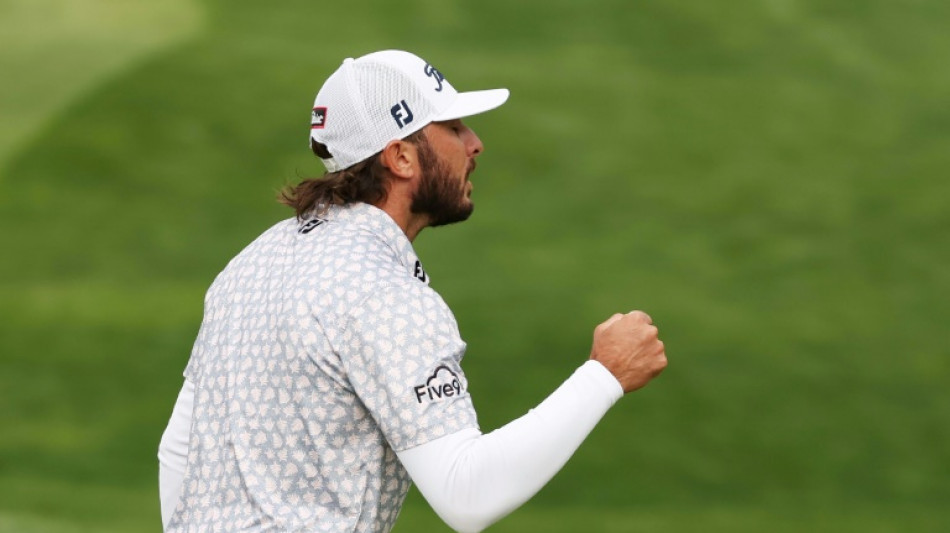 Max Homa held off fellow American Keegan Bradley down the stretch on Sunday to win the Wells Fargo Championship for his fourth career US PGA title.

World number 38 Homa fired a two-under par 68 in cold and breezy conditions to finish on eight-under 272 for a two-stroke victory at rain-soaked TPC Potomac at Avenel in suburban Washington.

"It feels good," Homa said. "It's a special day for me. I just feel like life is good and I'm playing some good golf."

Homa, 31, had captured prior tour trophies at the 2019 Wells Fargo, Riviera in February 2021 and last September at Napa, California.

"It's super awesome," Homa said. "I'm coming into my own and starting to believe in myself and that's all I can ask for."

Third-round leader Bradley, the 2011 PGA Championship winner in his major debut, made a closing bogey to shoot 72 and settled for a share of second on 274 with countryman Cameron Young and England's Matthew Fitzpatrick.

"I didn't play my best golf," Bradley said. "It was choppy and then I had a couple good stretches but I had a chance there at the end, so I'm proud of that aspect of it."

Four-time major winner and defending champion Rory McIlroy was fifth on 276 after a closing 68 with India's Anirban Lahiri, American Lanto Griffin and Germany's Stephan Jaeger on 277.

Bradley, ranked 64th, was chasing his first title in four years but couldn't match Homa as both endured roller-coaster back nines.

Bradley knocked his approach into a hazard at 11 on the way to a double bogey while Homa sank a par putt from just inside nine feet to seize a three-stroke advantage.

Homa found deep right rough off the 13th tee on the way to a bogey and Bradley two-putted from 48 feet for birdie at the par-4 14th to pull back within one.

But Homa bounced back with a 13-foot birdie putt at the par-4 15th while Bradley missed the green on the way to a bogey and fell three adrift with three to play.

"I made an unbelievable birdie on 15 while I was trying not to make double," Homa said.

Again Homa found trouble, sending his approach at 16 into deep right rough and rolling a 25-foot par putt five feet past the cup. Then Homa watched Bradley sink a nine-footer for birdie before making his bogey putt to keep a one-stroke edge.

At the par-4 18th, Bradley found a fairway bunker then came up short of the green. Bradley chipped to 21 feet and two-putted for bogey as Homa made a routine par.

Bradley began with a two-stroke lead but Homa opened with a birdie and Bradley made double bogey the par-5 second, leaving Homa one ahead.

Bradley missed a six-foot par putt to bogey the fourth but answered with a 21-foot birdie putt at the par-4 fifth, although Homa topped him from just inside eight feet at the fifth to keep a two-stroke edge.

Homa missed a seven-foot par putt at the par-4 seventh while Bradley made a 14-foot birdie putt at seven and a four-footer for birdie at the eighth to reclaim the lead.