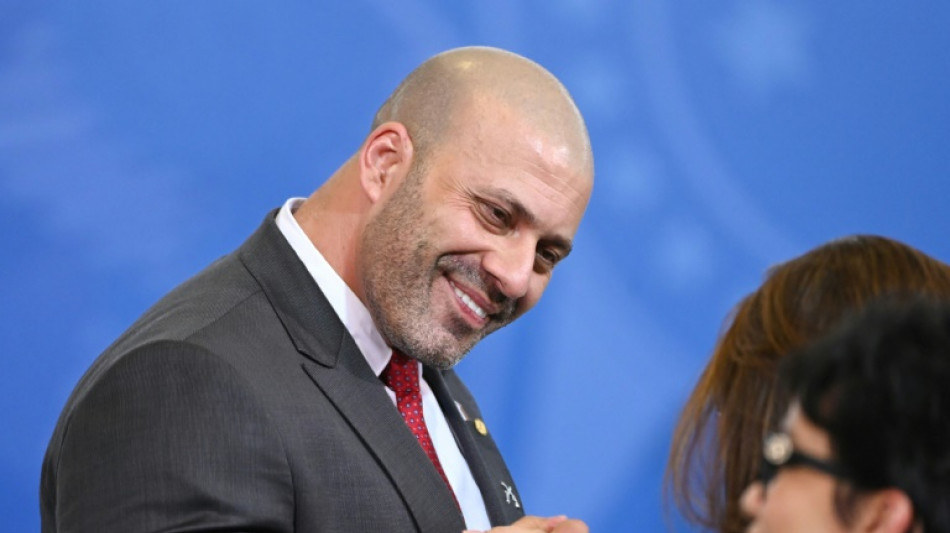 Silveira made international headlines last month after the Supreme Court sentenced him to nearly nine years in prison for verbally attacking the country's democratic institutions and leading a movement calling for the court's overthrow.

The next day, acting "in the name of free speech," Bolsonaro pardoned the first-term congressman from Rio de Janeiro -- triggering a firestorm in a country already polarized as it heads into October polls, where the far-right president is fighting to win reelection.

Silveira, 39, shot to fame in Brazil -- or infamy, depending whom you ask -- in 2018, the year he resigned from Rio's state police to run for Congress for the Social Liberal Party.

Riling up a crowd of far-right hardliners at a campaign rally, he destroyed a street sign paying tribute to late Rio city councilor Marielle Franco, a feminist and rights activist who was murdered earlier that year.

Franco, a hero to the left, was a hate figure to hardline conservatives. Silveira's act of vandalism helped guarantee his election that October, riding the same far-right wave that swept Bolsonaro to power.

Silveira, whose shaved head and hulking physique have drawn comparisons to American professional wrestler turned actor Dwayne "The Rock" Johnson, had already shown a rebellious streak during his six years as a policeman: he was disciplined 60 times for insubordination and misconduct, according to Brazilian media reports.

He soon made a name as one of Bolsonaro's staunchest supporters in the lower house, where he often sported his trademark lapel pin -- two crossed pistols.

But he was a relatively low-ranking member of the "Bolsonarista" tribe until his social media diatribes ran afoul of the Supreme Court.

With hardline Bolsonaro backers accusing the high court and Congress of conspiring to block the president's agenda, Silveira emerged as the fieriest leader of the movement calling for their ouster.

In a series of videos, he went on the attack against the court, saying its justices deserved "a thrashing."

Speaking of Justice Alexandre de Moraes, who ordered Bolsonaro investigated for spreading disinformation, Silveira said, "the people need to go to the Supreme Court, grab Moraes by the neck and throw his little egg head in the garbage."

He also delivered an impassioned defense of Brazil's military dictatorship (1964-1985), which Bolsonaro also admires, despite its record of human rights violations.

In February 2021, Moraes ordered Silveira arrested for allegedly plotting "acts aimed at harming (the Supreme Court) and the democratic rule of law."

Released on bail but banned from posting on social media, he continued to find ways to wage his war of words on the court.

He ditched the electronic ankle monitor he was supposed to wear, barricading himself inside his congressional office in March in defiance of a court order to wear it.

Bolsonaro, who said Silveira's arrest "hurt (his) heart," quickly pardoned him when the Supreme Court on April 20 sentenced him to eight years and nine months in prison and stripped him of his right to hold public office.

"In the past, (presidents) freed thieves... I free people who are innocent," Bolsonaro said at an event in Silveira's honor.

The Bolsonaro camp has made Silveira a martyr for the cause of free speech.

Eduardo Bolsonaro, the president's congressman son, compared him to Jesus, and he was greeted like a rock star Sunday at pro-Bolsonaro street rallies in Rio de Janeiro.

Silveira's clout on the right has risen in tandem with his legal troubles, earning him a coveted nomination to the lower house's powerful constitution and justice committee.

But "Silveira's importance in the Bolsonaro camp is more symbolic than real," says political analyst Andre Cesar of Hold consultancy.

With Bolsonaro trailing in the polls to leftist ex-president Luiz Inacio Lula da Silva (2003-2010) heading into October's elections, "it's a marketing ploy... for the most hardline base," he told AFP.