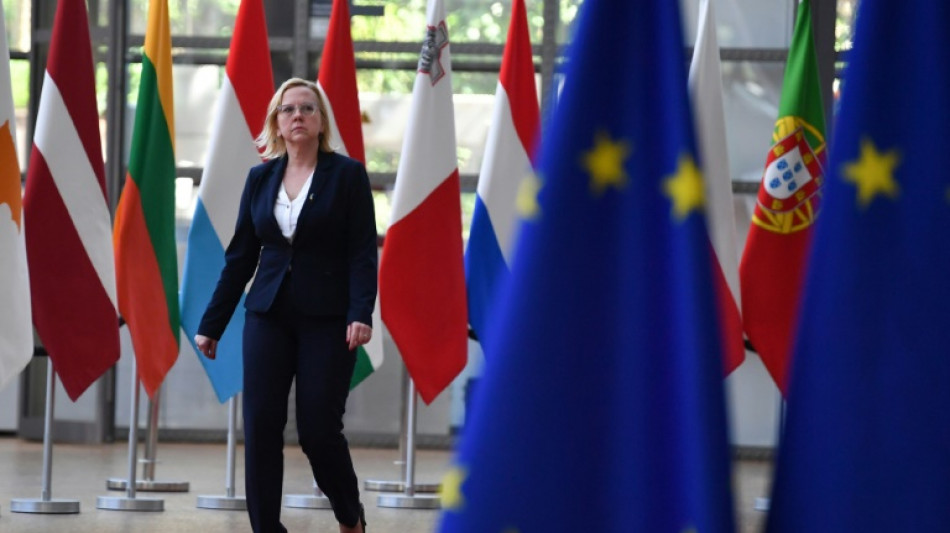 The European Union warned member states Monday to prepare for a possible complete breakdown in gas supplies from Russia, insisting it would not cede to Moscow's demand that imports be paid for in rubles.

The European Commission will on Tuesday propose to member states a new package of sanctions to punish President Vladimir Putin's Kremlin for its invasion of Ukraine, including an embargo on Russian oil, officials said.

But energy and environment ministers meeting in Brussels on Monday addressed the larger and potentially more complicated issue of Russia's natural gas, upon which several countries -- including EU top economy Germany -- depend for much of their power generation.

Moscow has demanded clients from "unfriendly countries" -- including EU member states -- pay for gas in rubles, a way to sidestep Western financial sanctions against its central bank. It has cut off Bulgaria and Poland after their firms refused to comply.

After the talks, the French chair of the meeting, ecological transition minister Barbara Pompili, and the European commissioner for energy, Kadri Simson, said the 27 member states were united with Poland and Bulgaria and would stockpile gas to be prepare for a breakdown.

Simson said that "following the full procedure as set out by Russia constitutes a breach of sanctions" imposed by the European Union.

She said that, to her knowledge, no European company was preparing to follow Putin's decree and change its payment methods.

But several countries are to renew supply contracts at the end of May, and reports suggest some could seek to work around the sanctions by following the method put forward by Moscow.

This would entail a firm opening two accounts in Russian state energy giant Gazprom's bank. Payments would be deposited in one account in euros or dollars, then be passed through the sanctioned Russian central bank, before arriving in the second account in rubles.

Kadri and some ministers seemed to say that this would still constitute a sanctions breach. But other member states demanded further clarification from the European Commission's experts.

"What has happened today is that the European Commission and the presidency have confirmed that paying in rubles is unacceptable, that it is a breach of sanctions and a breach of European solidarity," Poland's environment minister Anna Moskwa said.

"Many countries, including the Baltic states, Denmark, the Netherlands and Finland, have today reaffirmed solidarity and that they will certainly not pay in rubles," she said.

But Sweden's Khashayar Farmanbar, minister for energy and digital development, said: "I think the clarification is still ongoing ... it is a complex process."

"I mean, paying with one currency is one thing, but if that involves another country's central bank, then it becomes part of a different part of the package, and that is going to be a bit tricky."

The Czech minister of industry and trade, Jozef Sikela, said he had asked for a "clear explanation of how to proceed".

During the meeting, European officials were forced to deal with media reports that Italy wants to continue to pay in rubles until there is a legal alternative.

Kadri said she had spoken to Italian minister Roberto Cingolani, who did not attend the meeting, and that the report was "misleading" -- but she promised to provide him and all EU capitals with clearer guidance on resisting Putin's ultimatum.

She added that Russia's actions showed "they are not reliable suppliers and that means that all the member states have to have plans in place for full disruption".

Germany's minister for economic affairs and climate Robert Habeck said Berlin would follow EU policy but also suggested the dual Gazprombank accounts plan could be "a face-saving solution for Putin".

On Tuesday, the EU will propose a phased-out ban on imports of Russian oil -- but not gas.

The sixth package of anti-Russian measures will also target the country's largest bank, Sberbank, which will be excluded from the international SWIFT messaging system, diplomats said.