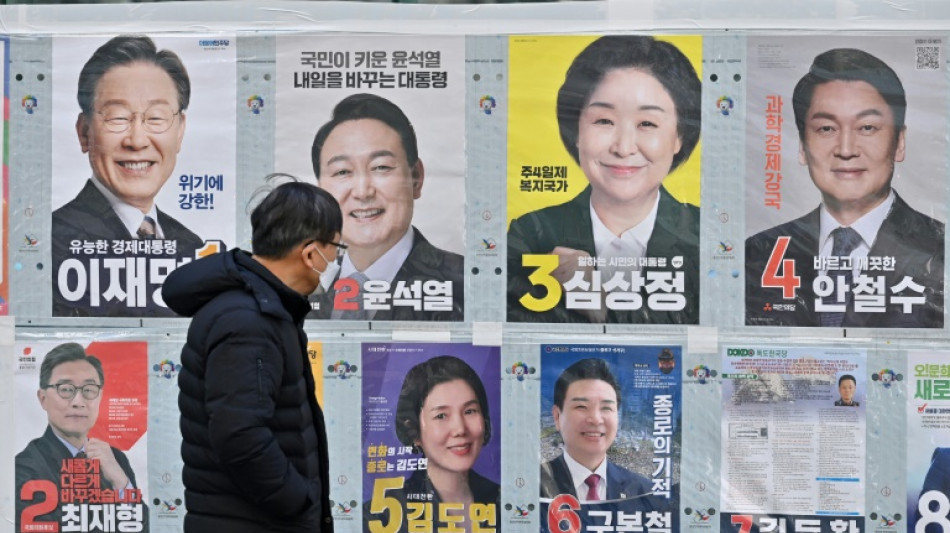 South Koreans were at the polls electing a new president Wednesday with economic inequality a top concern especially among young swing voters, despite growing sabre-rattling from the nuclear-armed North.

Polling booths opened at 6 am (2100 GMT) and record early voting indicates turnout will be high after a campaign dominated by mud-slinging between liberal Lee Jae-myung and conservative Yoon Suk-yeol.

The pair, who are both so unpopular local media have branded it the "election of the unfavourables", have been neck-and-neck in the polls for months. Some 90 percent of the electorate supports one or the other.

Analysts say South Korean politics is particularly adversarial, with democracy only restored in 1987 after decades of authoritarian rule.

Presidents serve just a single term of five years, and every living former leader has been jailed for corruption after leaving office.

The two parties are ideologically poles apart, and analysts say the key question is whether voters will kick out Moon's dovish Democratic Party and usher in a new hawkish, fiscally-conservative regime under opposition People Power party's Yoon.

"What the country needs right now is change," 71-year-old Hong Sung-cheon told AFP at a polling station in southern Seoul.

However, younger swing voters are likely to prove decisive, analysts say, and their top concerns are skyrocketing house prices in the capital Seoul, domestic inequality and stubborn youth unemployment.

"Turnouts and choices by those in their 20s will have a significant bearing on the outcome," Shin added.

Both leading candidates have promised to build millions of new homes, although the left-leaning Lee relies more on public housing and conservative Yoon on market-led solutions to the crisis.

Polling stations opened at 6 am (2100 GMT) and will shut at 6 pm. For 90 minutes after closing, Covid-positive voters will be allowed to cast their ballots.

South Korea is in the grip of an Omicron wave and reported a new record high of more than 300,000 new cases Wednesday.

Voters have to wear masks and many spritz their hands with sanitiser after casting their ballot.

More than a million people are currently isolating at home after testing positive, health authorities say. The country amended its electoral laws last month to ensure they would be able to vote.

Opposition candidate Yoon is more hawkish on North Korea, and has threatened a pre-emptive strike if necessary.

The former top prosecutor is also promising to abolish the gender equality ministry, saying South Korean women do not suffer from "systemic gender discrimination", despite evidence to the contrary.

Yoon has made a series of gaffes on the campaign trail including most recently with a tweet on Ukraine in which he posted a tangerine with an angry face in a bizarre reference to the country's Orange Revolution of 2004.

Lee, a former child factory worker turned politician, has offered a slew of fresh policies from a universal basic income to free school uniforms -- but his ideas have been overshadowed by media coverage of scandals.