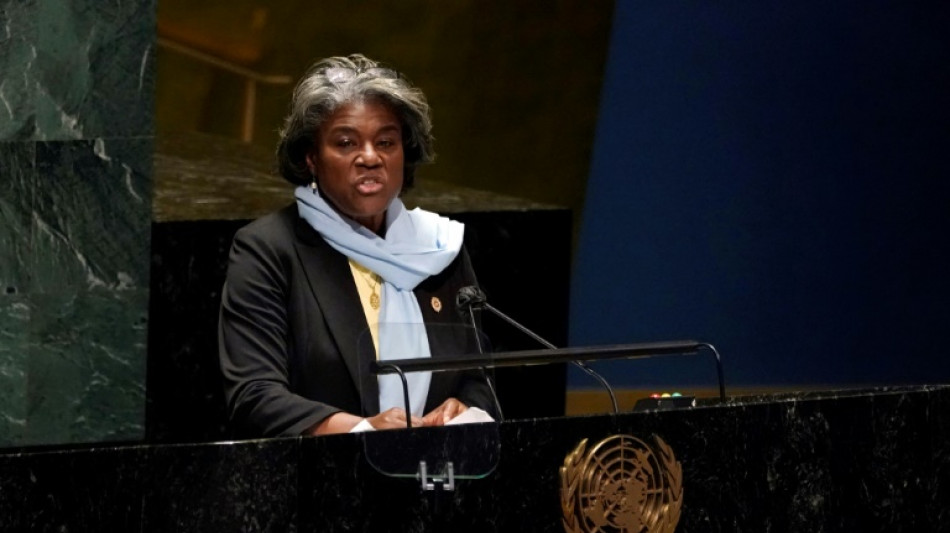 Russia's "reckless" overnight attack on a nuclear power plant in Ukraine is a dangerous escalation that "represents a dire threat to all of Europe and the world," the US ambassador to the United Nations said on Friday.

"By the grace of God, the world narrowly averted a nuclear catastrophe last night," Linda Thomas-Greenfield told the Security Council.

"It was incredibly reckless and dangerous. And it threatened the safety of civilians across Russia, Ukraine and Europe," she said.

She urged Russian leader Vladimir Putin to end the invasion of Ukraine.

"Not only has he not listened, we've just witnessed a dangerous new escalation that represents a dire threat to all of Europe and the world," Thomas-Greenfield said.

"These statements are simply untrue," Vassily Nebenzia told the Security Council. "This is all part of an unprecedented campaign of lies and disinformation against Russia."

He said Russian troops had exchanged small arms fire with Ukrainian forces at Zaporizhzhia but had not shelled the facility in southern Ukraine.

He said the fighting occurred at a training complex "located just outside the territory of the nuclear power plant" and accused "Ukrainian saboteurs" of setting fire to the training facility.

"The operation of the nuclear power plant continues normally," Nebenzia said. "Nothing threatens the safety of the six power units.

"There is no threat of a release of radioactive material."

Sergiy Kyslytsya, the Ukrainian envoy to the UN, lashed out at his Russian counterpart, accusing him of spreading "lies."

He said Russian troops in control of the nuclear facility were refusing access to Ukrainian inspectors.

Kyslytsya also formally called for the United Nations to establish a no-fly zone over Ukraine.

"Establishing a ban on all flights in the airspace of Ukraine should be a top priority for the Security Council," he said.

NATO has already ruled out setting up a no-fly zone over Ukraine and Russia would veto any such proposal in the Security Council.

Zhang Jun, the Chinese envoy to the UN, called on the international community meanwhile to "stay cool-headed and rational."

"Any action must contribute to de-escalation and diplomatic settlement, rather than adding fuel to the fire, leading to further escalation and deterioration of the situation," the Chinese ambassador said.

Rafael Grossi, director general of the International Atomic Energy Agency (IAEA), speaking to the council from an airplane on a flight to Iran, said he was prepared to travel to Ukraine to ensure the security of the country's nuclear facilities.

"This mission will be strictly restricted and circumscribed to the safety and security of the nuclear installations in Ukraine," Grossi said.