Fear and solidarity for refugees stuck at Polish border 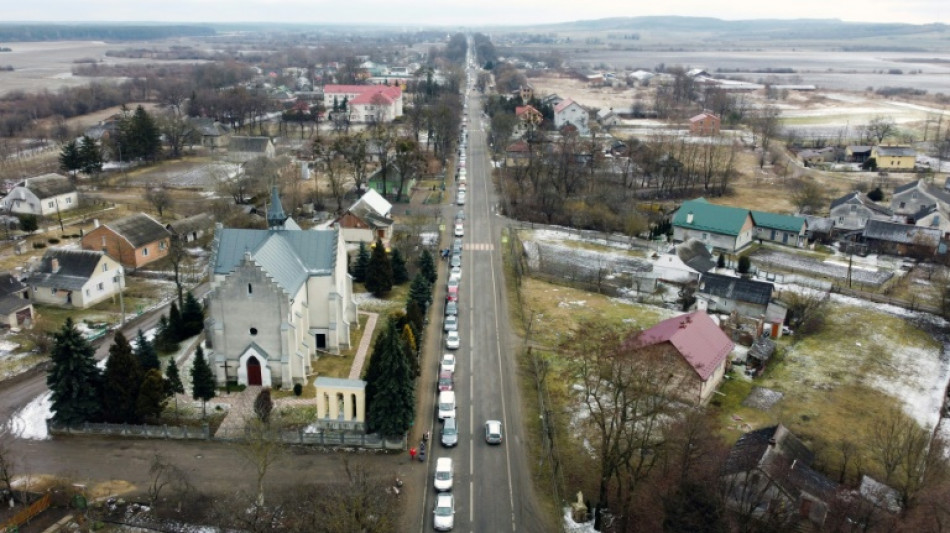 They recount fears of a war they never imagined would happen and the kindness of strangers. The cars queue as far as the eye can see: thousands of Ukrainians desperate to cross into Poland and to safety.

Tvirzha is a tiny Ukrainian village 24 kilometres (15 miles) from the Shegyni border post. It is here that the line of vehicles ended, mainly filled with women and children, as they crawled to Poland.

Heaps of rubbish and some abandoned cars were the only pieces of evidence that the queue was even several kilometres longer at the end of last week.

It was in Tvirja, in front of the school she leads that Ivana Shcherbata set up a stand offering hot drinks and food with the help of some women in the village.

"We stood up and did all that with our own hands," Shcherbata said, presiding over everything that a freezing passenger could dream of.

Tea, coffee, sandwiches and large pots of borscht, a beetroot soup whose origins Ukraine and Russia dispute, were all prepared in the school's kitchens, which were overflowing with cans and jars of pasta.

On the second floor, the nursery's dormitory welcomed mothers and their children in need of a warm space for the night.

"I started this spontaneously then these women came to offer help, to bring food," said Shcherbata in the kitchen.

Arriving from Kryvyi Rih in central Ukraine, Daria, with her son in her arms, had no words to describe the solidarity she saw on her journey.

"I am really touched that we have such people. Everywhere, we were given food, clothes, they did everything to help us," said the 32-year-old government employee.

"We are on the road for three days now, in a traffic jam for one day," Daria added, evacuating with her sister who returned from Canada where she had spinal surgery the day before the Russian invasion.

According to the UN, more than 660,000 people have already fled to bordering countries, mainly to Poland, which has welcomed nearly 300,000 Ukrainians.

The country's roads have been overwhelmed, making journeys longer and volunteers have set up checkpoints fearing Russian "provocations" and adding to bottlenecks.

"The trip was really hard. It's calmer here, but the drive was really scary," said Katerina Zaporozhets, a laboratory worker from the central city of Cherkassy.

It took her 24 hours to arrive at the Shegyni border post -- and she will likely wait another 48 hours before crossing.

The six children whom she and two friends brought with them were already crossing the border where the local municipality arranged buses to take them directly to Shegyni.

For these future refugees, they were not prepared for what awaited them.

Some cars moved in the opposite direction. On board were men who had brought their families to the border and who are not allowed to leave the country, having been called up instead to fight.