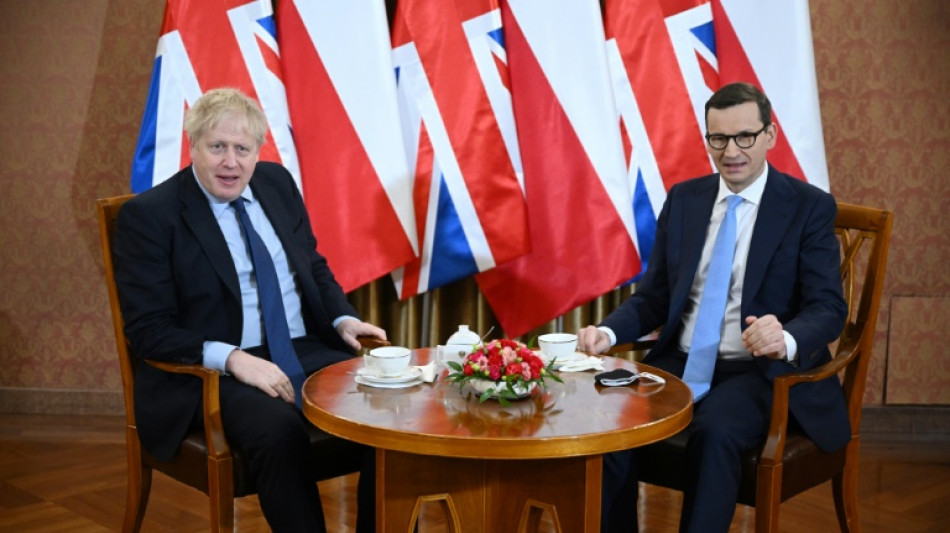 The UK government warned Tuesday that Russian President Vladimir Putin and his commanders in Ukraine could face prosecution for war crimes and that Western sanctions would remain "for as long as it takes".

The attack on Kharkiv has destroyed a school and, according to its mayor, killed at least 11 civilians.

The front pages of British newspapers carried photographs of two young girls killed by Russian attacks in Ukraine and the words of a doctor as he tried to save one of them: "Show this to Putin."

Johnson said Russia had underestimated the "passionate desire" of Ukraine's people to defend themselves, as well as "the unity and resolve of the West and of the rest of the world".

"And we will keep up the economic pressure," he said, after Britain on Tuesday joined the European Union and United States in sanctioning Russia's biggest lender Sberbank.

The move came after the government on Monday said it would freeze the UK assets of all Russian banks and ordered British ports to turn away Russian ships.

"It is plainly already having a dramatic effect," Johnson said, with the Russian ruble and stock market in freefall, and customers queueing to withdraw their savings from banks.

"We are ready to intensify and to keep going for as long as it takes."

Justice Secretary Dominic Raab, a former war crimes prosecutor, said Britain and its allies would also be patient in bringing any violators to heel, pointing to the 1990s wars in the former Yugoslavia.

"That's why we're making it clear both to Putin but also to commanders in Moscow, on the ground in Ukraine, that they will be held accountable for any violations of the laws of war," he told Sky News.

The International Criminal Court in The Hague said Monday it was investigating after finding a "reasonable basis" to suspect alleged war crimes and crimes against humanity in Ukraine since Russia seized the Crimea peninsula in 2014.

For Putin, Russian generals and soldiers, "there's a very real risk that they'll end up in the dock of a court in The Hague", Raab added on BBC television.

"If and when the ICC decides to take action, I'm sure the UK and allies will want to support them practically, logistically."

Agnes Callamard, who heads the global rights monitor, said the "stomach-turning" attack in the town of Okhtyrka "should be investigated as a war crime".

Raab added that the Western sanctions would cause Russian oligarchs to intensify pressure on Putin, as many of them suffer personal asset freezes.

"But it's inevitable that Russia's and Putin's misadventure, his catastrophic decision, will be disastrous for the Russian people," the British minister said.

"It will show them the economic cost to them of getting bogged down in this unwarranted, unjustifiable war."